I decided to do a quick look back on my latest project, y(our) story.

It started with me catching Tim de Vil live in San Francisco opening for The Matches. The precise moment I knew I needed to work with Tim was right in the middle of "Say it...", in which the lyrics are..

Right in the middle of the song (9:47), he sat down on stage and continued to unenthusiastically "sing" these lyrics a few more times before it was over. It was a perfect storytelling moment in a great song.

He pitched an idea to take the 5 songs on his albums that serve as sort of "skits" and put them together into one short film/music video. Sounded weird.. I Loved It!

He sent me an mp3 file called "all 5" and so it began. I listened to the songs to and from work and on my way around town on runs. I must've listened to "all 5" about 40 or so times before calling Tim.

I dissected how each of the songs made me feel. I figured each of the songs imbue a completely different feeling so the videos should also each feel distinct in their own way. I felt like I could do that with color correction, editing techniques and cinematography.

But I still wanted them to follow one continuous story with a single set if characters.

I came up with the throughline of a couple that starts off in a seemingly perfect relationship. Then the relationship hits this rough patch that everyone knows too well. When there isn't really fighting or arguing, there is just some unexplained disconnect happening between these 2 people.

There didn't seem like any sort of indication from the lyrics that the relationship was volatile. Just stale or stagnant. All the right elements are there just something is off.

I rang Tim and we started chatting about my ideas. I had broken down each of the songs into beats.

Tim and I focused in on those. They weren't as developed as that right away I assure you. Also Mary wasn't named until post-production but more on that later.

Fun Fact: Every time I receive anything that reads "Hey, All" or anything like that, on first glance I think it says "Hey, Ali! When I received this I definitely read it as "TDV loves all" and I thought to myself, "How generic.."

Tim booked a flight for 2 weeks and we started hard prep. I think we had 15 days or so of prep. We spoke a lot on the phone.

Our main location, the Big Blue House, is our own house. We had just moved in and I was eager to film something there ASAP. Thusly I wrote the house as a character in our short.

I also reached out to Melody Ranch where we shoot Westworld and got permission to film pieces there. We would end up using the Saloon and a back alley. The rest we figured would be run and gun and we would find on the day.

I decided to have a few different people behind the camera to give each of the songs even more of a unique visual style. Casey McBeath, Diego Robles and I each shot portions. Leon Behar came up to help me with the script and Patty Bonilla handled our Craft Services.

We used a Sony fs7, a Panasonic gh4, a GoPro 3+, and a Blackmagic Production Camera. We also got a Movi Rig, a Dana Dolly, a steadirig for the Gopro and a Drone. And my absolute favorite thing about shooting music videos is I never have to worry about sound.

Obviously Tim would play Tim. And for Mary, I went with Daisy Lenelle. She has always delivered for me in the past and I knew she would kill this one.

Tim traveled to Los Angeles from Portland along with Sierra Layna and TJ Reed on the 19th of December 2016. In true indie fashion they stayed with us at Big Blue.

There was a short list of things to get done. We ran about town tying up loose ends. We needed a Piggy Bank, an Answering Machine, and a place to shoot Tim shopping for "Say It..."

Things really came together in the 11th hour. We found the Answering Machine at the first Goodwill we went to. Then we went to a small locally owned store and found the piggy bank and our location for "Say It..." We didn't ask. We just figured we would come back with a camera and work it out.

We arrived back to Big Blue and started winding things down for the evening since we began Principal Photography in the morning. I didn't sleep horribly well. I never do before a shoot day. Brightside: our whole first day would be filmed at our house.

Good night for now. I'll get into the production phase next time.. 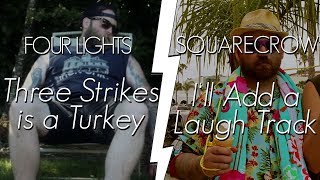